BEIJING—China suspended high-level government exchanges with Japan, significantly escalating the two countries’ worst dispute in five years, after Japanese authorities extended the detention of the captain of a Chinese fishing boat detained near disputed islands in the East China Sea. 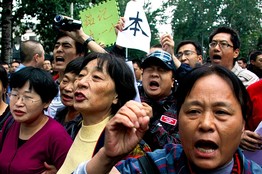 ReutersProtesters in Beijing yell slogans outside the Japanese Embassy during a rally Saturday about disputed islands.

China and Japan have frequently clashed over the unpopulated islands, known as the Diaoyu in China, and the Senkaku in Japan, whose waters are thought to contain substantial natural-gas reserves, but this year’s row has graver implications for both—and the U.S.—as China is rapidly acquiring the naval power to enforce its claims.

The U.S. has been seeking to strengthen its presence in Asia, both in an effort to boost U.S. exports and as a way to provide a counterbalance to China’s increasing dominance in the region.

U.S. officials, along with many of their Asian counterparts, have expressed growing concern over what they view as the increasingly testy tone taken by China over some regional issues, as Beijing grows more confident on the global stage. Ensuring stability and a peaceful resolution of disputes remain priorities for the U.S. in the region, said Jonathan Pollack, a professor of Asian-Pacific studies at the U.S. Naval War College.

And while U.S.-China trade and economic ties have expanded rapidly in recent years, Washington wants to send a message to Beijing that its traditional alliances in Asia remain important, he said. “We’re not looking for a fight with China…but the U.S. will continue to put down markers reinforcing our commitment to East Asia and East Asia waters.”

Fallout from collision between vessels near Senkakus leads to decision

China has postponed a senior legislator’s visit to Japan amid the renewed territorial dispute sparked by ship collisions last week off the Senkaku Islands in the East China Sea, Japanese officials said Tuesday.

“It is very regrettable” that Li Jianguo, vice chairman of the Standing Committee of the National People’s Congress, will not visit Wednesday as planned, Chief Cabinet Secretary Yoshito Sengoku said.

The Chinese Embassy told the secretariat of the Lower House on Monday that Li’s five-day visit under a regular exchange program for parliamentarians will be put off, citing “various reasons” and without elaborating, secretariat officials said.

Sengoku said that in light of the tension between Japan and China, “All the more, the two countries’ legislators should meet and engage in frank discussions away from the level of the central government.”

By doing so, there would be more significance in carrying out exchanges between lawmakers, he added.

The dispute stems from collisions Sept. 7 between a Chinese fishing boat and two Japan Coast Guard ships near the Senkaku Islands, which are controlled by Japan but claimed by China and Taiwan.

Japan released 14 crew members of the Chinese trawler Monday, but the captain remains detained. Authorities suspect him of deliberately causing his vessel to collide with one of the patrol boats.

On the arrest of the captain, Sengoku reiterated Tokyo’s stance that it is dealing with the incident in line with domestic law.

The Chinese diplomatic mission in Tokyo informed Japan of Li’s postponement around 11 a.m. Monday by telephone. His visit had been planned as the sixth under an exchange program launched in 2005 between the Lower House and China’s legislature.

Li was to have met with such veteran lawmakers as Lower House Speaker Takahiro Yokomichi, his predecessor Yohei Kono, and Upper House President Takeo Nishioka.

The sea incident has also led China to postpone talks with Japan on signing a treaty over joint gas field development in the East China Sea.

Meanwhile, Taiwanese activists headed home after sailing near the disputed islands for several hours in a voyage to promote Taiwan’s claim to the disputed territory.

A fishing boat with two Taiwanese activists and three crew members came close to Uotsuri Island, one of the islets, in Japan’s exclusive economic zone early Tuesday, according to the Japan Coast Guard, whose vessels closely followed the boat.

State minister Renho said Tuesday the dispute between Japan and China over the Senkaku Islands is a territorial issue, contradicting the government’s position paper issued in June that denied the existence of any territorial dispute in the East China Sea.

“Anyway, since it is a territorial issue, Japan should express its resolute stance calmly,” Renho, minister of state for government revitalization, told a news conference.

The position paper adopted by the Cabinet says there is no territorial dispute in the East China Sea that needs to be settled.

Later in the day, Renho told reporters her remark included “some misleading expressions” in an apparent effort to defuse any controversy.

“The Senkaku Islands are inherently (part of) the territories of our country both in terms of history and international law,” Renho said.

Two of the three pinball-like balls hit and broke a window in a guards’ office next to the school’s front gate on Monday, but no injuries were reported, the embassy said. The perpetrator fled.

The school found graffiti on its wall Monday morning, a development that may be linked to China’s anger over Japan’s handling of a collision last week between a Chinese fishing boat and two patrol boats near the disputed Senkaku Islands.

“The Chinese people will never allow (Japan) to invade” what Beijing says is its territory, the graffiti said.