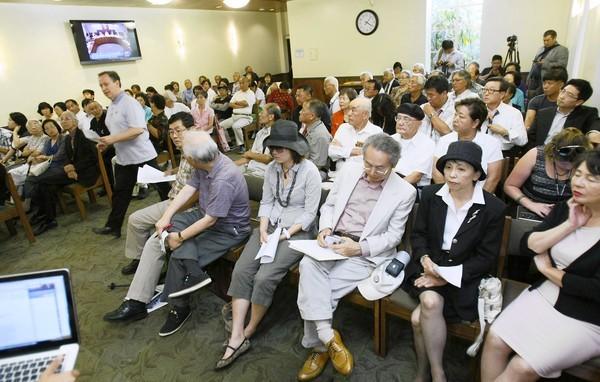 (from LA Times)
Despite significant opposition, the Glendale City Council has approved a 1,110-pound monument honoring Korean women taken as sex slaves by the Japanese army during World War II.

Members of the council received hundreds of emails — many appearing to come from Japan — and listened Tuesday to dozens of speakers who said the so-called comfort women were not indentured servants but ordinary prostitutes.

Glendale has become the latest U.S. city to set the scene for a decades-old controversy between some Japanese who deny their army abducted up to 200,000 women from Korea, China and other countries as sex slaves and Koreans who want to raise awareness of the human rights violations.

“Rather than using this as a wedge to drive us apart … look at this monument not as a blame or shame to any nation, but to remind us that war has consequences,” Councilwoman Laura Friedman said.

With the council’s approval, Glendale is set to be the first city on the West Coast to install such a memorial on public land. Last year, a Japanese delegation went to New Jersey to request a monument in a park be removed, sparking a desire among Korean American groups to erect even more memorials.

Glendale’s planned monument is a replica of a statue that sits in front of the Japanese embassy in Seoul. Surviving comfort women often protest at the monument, which features a young woman in a traditional Korean dress with a bird on her shoulder sitting next to an empty chair.

A group of activists who believe the women willingly worked as prostitutes — although that assertion has been denounced by Japanese political officials and historians — has been coordinating a letter-writing campaign against the memorial.

It began as a trickle, but transformed into a tsunami this week. Mayor Dave Weaver said he received 350 emails opposing the monument, all appearing to come from Japanese individuals.

Then on Tuesday, about 100 people packed the council chambers. The majority of the 27 speakers were Japanese Americans, many from Los Angeles, San Gabriel and Pasadena, opposing the monument.

They denied that the Japanese military coerced women into sexual servitude and said a U.S. city should not meddle in Japanese and Korean affairs.

Many were disappointed when the council voted 4-1 for the monument that will be placed in Central Park. Weaver opposed it because he wants a master plan for the park before any statues are erected.

“I’m disappointed, definitely,” Shiki Dahn of Los Angeles said. “The council already had their decision made.”

Indeed, the council already set aside a portion of Central Park for the monument in March, and the $30,000 bronze, obsidian and granite statue — paid for by the Korea Glendale Sister City Assn. — was shipped from Korea last month.

Councilman Zareh Sinanyan said rather than changing his mind, the letter writers and speakers strengthened his resolve to vote for the monument, comparing the sex slavery deniers to those why deny the Armenian genocide.

“This is a moral issue,” Sinanyan said. “We are taking a meaningful step to show our moral support, our sense of camaraderie and our sharing of the pain that our Korean American brothers and sisters feel about this issue.”

“This was not meant to humiliate or to shame them. It was not to do any of that. It’s about us learning from this experience so it doesn’t happen again,” Woo said after the meeting.